People both in and out of New York have wondered why so many people are against NYC Mayor Bill de Blasio running for President. New York city residents have placed billboard ads in Iowa asking for de Blasio to return to NYC. People have posted missing posters around NYC for Blasio to return to the city he’s supposed to govern. His aides and allies have scorned his campaign. But why all the hate for a man trying to run for higher office? 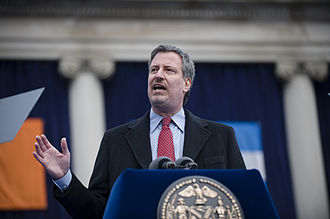 Back during the last mayoral election in 2017, NYC residents commonly thought he was going to run for president. He tried to dissuade such fears by pledging publicly that would stay in office the entirety of his term and that he was committed to the job.

In a company there may be a team working on a specific task. If one person is on leave, another member of the team can step in to fulfill the required duties. However there is only one mayor of New York City. Therefore New York City residents are justifiably angry that their mayor, who pledged not to run for president, is running for president. For one month, he was only in office for 7 HOURS that month. Which is less than one regular workday. Yet he continues to occupy the mayoral spot, preventing things from getting done.

While he did not specifically say he wouldn’t run for president, he promised to stay in the NYC mayoral position for the whole term. That term would end Dec 31st 2021. If elected president, he would have to assume office January 2021. Therefore he’s either: 1) running for a presidency he’s not eligible to take or 2) he’s breaking his promise to New Yorkers to stay for his entire term, which he promised while asking voters to elect him to his current position. How could you trust a mayor running to be president that lied to become mayor?

There’s also a common thought that he’s running for president not to become president, but to make money. People think he’s hoping for donors that desire his influence as mayor of New York City to donate money to his campaign, and that he’ll use these campaign funds to benefit himself. Such as hiring his son as a paid advisor and going on trips paid for by his campaign, things he has already done.

Using NYC as a Political Show for his Presidential Ambitions

In an attempt to improve his image as a progressive mayor, he wants to show that he can integrate racially New York City public schools. To make numbers look better, he’s been pushing racist policies with his schools appointee Richard Carranza to reduce Chinese enrollment in good schools. His racist attempts to improve his numbers for the presidential stage would set back New York City education and families by decades. Everyone knows that affirmative action is racist, yet he’s using these policies to polish his reputation and showing that Black and Hispanic enrollment have increased at elite high schools.

Most of his presidential campaign donations have come from the hotel industry, which has been lobbying for his support as mayor to prevent competition. If he wasn’t mayor and therefore not in a position to help the hotel industry, many residents doubt he would receive these donations. There’s a general feeling on the NYC reddit that he’s selling out the city to further his own ambition. And selling for far too cheap.

Want to stay up to date on the 2020 Election Results? Use this handy app tracker available for both Android and iOS